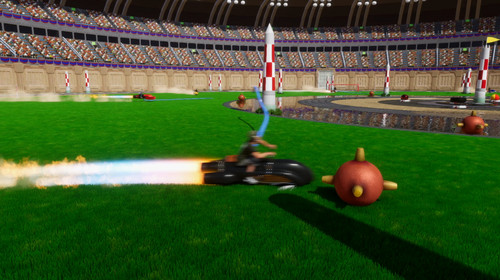 This is the update where you can team up with a friend (or let all the AIs team up against you like in the original), try out some new levels and enjoy a MUCH smoother ride due to physics changes all while listening to some new music

Note: This update is not compatible with old save files.

Added Teams mode vs AI, different unlocking state for each mode, this is the recommended mode for split screen!

Added new music to the game so even if you don't load the original music you won't suffer.

Fez boy is here! he will referee you to death if needed.

- Rockets now fly higher in the intended height (fixes some hard times going over fences)
- Further calibrated rockets.
- Improved how rockets handle, they are much more refined and don't jump/lose traction anymore when pitching down and then up.
- Pillars will now cut tethered players rope (not when you do it on foot)
- You can punch now ^^
- Dispensers wait for game start.
- Smoothed out the american football's physics.
- Some fixes and improvements in racing AI and AI in general.
- Aero spray now also increases max height by 10 percent!

- Persistant number of AI on special levels.
- Fixed generic "You Lose!" Message, now it is more clear why.
- No more confusing  "playername wins, Level failed" when you win the game but lose the level due to requirements.
- Added back button for mouse on Rocket Selection.
- Added name prompt on start.
- Tutorial button now reflects the current game mode.

Get Rocket Jockeys - The Remake

Fun, Classic and Legendary! Ride rockets and cause mayhem.

Amazing work on this game! One potential bug, I noticed the game is not playing the custom music tracks anymore and just defaulting to the open license music. This worked in the previous release but seems to have stopped working in the latest one.

Fixed on 138 hotfix.
It was a tickbox on my end that told the game to ignore outside music

Awesome!!!! Thank you so much! Absolutely amazing job!